Hi readers!! Welcome to the newest addition to The Soup’s repertoire. In this segment we review books for your reading pleasure. Want something different from your basic YA lit? Well you’ve come to the right place! 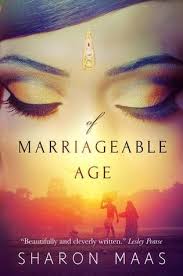 I think this one goes to Of Marriageable Age by Sharon Maas. Set in Guyana and India, the story is told from three perspectives at two different time periods. The first arc describes the life of Sarojini, a Guyanese girl who feels trapped by her father’s iron fist and his totalitarian rule over the family. She longs for more than just an arranged marriage and a family, despite her father’s urging. She takes solace in her enigmatic mother who has a certain “je ne sais quoi” that makes her almost magical. Her mother is the silent constant in their house, with her savory cooking and gentleness, the antithesis to her bigoted and strict father. The next arc is told from the perspective of Nataraj, a young boy who grows up in an orphanage in India and is one day adopted by a white doctor. He grows up with the doctor who imparts his knowledge and work ethic to the boy. The final arc takes place in the generation before Saroj and Nat, and tells the story of Savitri, the daughter of a cook on a white family’s estate. Savitri and David, the son of the owners are best friends and eventually fall in love. While the plot is not very fast paced, the reader slowly realizes the links between the arcs and the whole story starts to make sense. The style of writing is altogether very descriptive and almost therapeutic, you feel everything each character feels as if you share their body. The plot twists in the middle and end will shock you. Overall a great read. Available in the Kindle store. 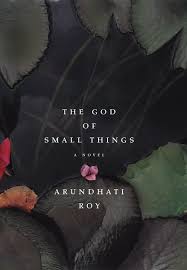 Hands down this goes to Arundhati Roy’s The God of Small Things, a gem I discovered in the school library. The plot is not particularly fast paced but Roy’s writing style is absolutely breathtaking. Her descriptions of the scenery are highly detailed, and her characters are complex and startlingly human. The story discusses the life experiences of twins, Esthappen and Rahel, who grow up in Kerala, south India with their grandmother, grand-aunt, uncle and mother. The story examines the effects of love and the lack thereof on children, and how their perception of the world is altered by the influence of adults in their lives. The twins are unique and gifted children, however their circumstances expose them to many harsh situations that eventually ruin them emotionally. Roy takes the readers on an emotional roller coaster, having them dying from laughter in one instant and in tears the next. This novel truly encourages deep introspection on humanity’s capacity for both great evil and great love. A thread of melancholy runs through the novel which only adds to its beauty. Overall one of the most unique and touching novels I’ve ever read.

Most Unique YA novel

The novel Firsts by Laurie Elizabeth Flynn is definitely one of the most unique YA romances I’ve read. It revolves around protagonist Mercedes Ayres and the good deeds she does for virgins; she makes their “first time” less awkward for both the boys and their girlfriends. She also has an ongoing affair with her classmate Zach, who wants to be her official boyfriend. However, she doesn’t want a serious relationship because of trauma that occurred between her and Luke, her first ever boyfriend. This buried trauma is also why she does what she does for the virgins, as a form of reversing karma. Unfortunately, conflict ensues with her best friend Angela’s boyfriend Charlie. The ending of the novel is very emotional, and unexpected. The revelation of Mercedes’ past is heart rending and really makes her a very sympathetic character. I liked this book because the characters weren’t stereotypical or contrived; despite performing many sexual acts for the virgins, Mercedes is intelligent and hardworking and a generally good person. She’s not the stereotypical one dimensional “loose” character, and her friendship with Angela seems very genuine, despite the secrets between them and the different paths their lives take. Overall a moving book and a gripping storyline. Available in the Kindle Store.

I’ve read a lot of historical fiction and non fiction, mainly on WW2 and the Holocaust. One of my favourites of this category was Girl in the Blue Coat by Monica Hesse. The story follows Hanneke Bakker, a dutch teenager who smuggles food to wealthy people during the war. Her boyfriend Bas had been killed in battle and she has become isolated from her best friend. One day, she is asked to find a missing Jewish girl by one of her customers. Despite the immense risk, she agrees. Upon her search, she joins a resistance organization that saves Jewish babies, among other acts of rebellion. She discovers the real horrors of what happens to the Jews in the ghettos and so is even more pressured to find the Jewish girl. While all of this is happening, she still experiences the usual teenage struggles of losing a loved one and having fights with your friends. A likable main character combined with a gripping plot and wild plot twist make this book a real page turner. A good intro for teens into WW2/ Holocaust lit. Available in the Kindle Store and in print. 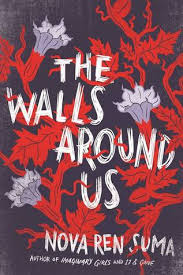 not much of a paranormal fiction person, but this book was really interesting. With not one, but two unreliable narrators *gasp*, The Walls Around Us by Nova Ren Suma tells the story of Orianna, accused and wrongly convicted of a crime she did not commit, from the perspectives of Violet her best friend before she was imprisoned and Amber, her cellmate in juvenile detention. The plot does not stick to any particular chronological timeline but skips back and forth from past to present. Violet’s parts reveal her jealousy of Orianna’s natural talent at ballet and her endearing personality, both things that Violet lacked (*cough* fake friend *cough*). We then find out that Violet is only as successful as she is now because of Orianna’s imprisonment. Violet also knows the details of the crime Orianna was accused of but her mind has altered reality, so her recollection keeps changing throughout her telling of the story. Amber on the other hand is an inmate in the same detention center as Orianna and recognizes her innocence almost instantly. Eventually, she comes to befriend Orianna or Ori and is told the real story of what happened. Her desire to avenge Ori for the wrongs done to her leads to the stunning climax of the novel. Personally I thought the ending was a bit abrupt and weird but I hear it’s supposed to be open to interpretation. However, “The Walls Around Us” was a gripping and interesting read, that revealed the inner workings of teenage girls’ psyches. Dark and edgy, it is definitely a page turner that you can finish over a weekend. Available in the Kindle Store.

View all posts by 876alphabetsoup